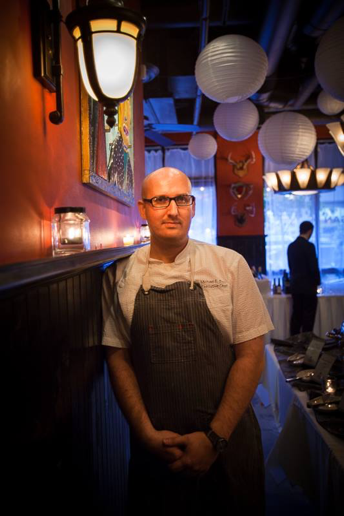 Chopped is one of my favorite programs and I watch it religiously on the Food Network.

Imagine my surprise and delight when one Saturday in December (2016) – while catching up on the programs I DVR’d –  I see Michael Bonk walking in as a competitor on Episode 16 in Season 31 of Chopped.

I was like: “I know him, I married him.” It was so much fun watching him eliminate his competitors one at a time.As a Chopped winner he took home the $10,000 and gave it to his wife Elizabeth. He did publicly say he would turn his prize money over to her.

I encourage you to watch the Chopped episode if only to hear about Michael’s difficult upbringing and how much cooking played a role in growing up. His story made the wedding even more special.

Michael and Elizabeth were married on Saturday, February 1, 2014 at the Carlyle Club right outside of Old Town in Alexandria, VA. The Carlyle Club is a wonderful venue based on the 1920’s “speak easy” clubs. They had an “adults” only wedding. It was a great party.

Last month I visited Michael at The Bird and has an amazing meal. I can’t recommend it enough.

I’ve now married a Chopped Champion, my dentist, and my physical therapist, not to mention all three of my nieces and sister. How fun!